We are a research and service division of:

We have several geologic maps and geologically themed posters and cards available for purchase that are suitable for framing, lamination, and classroom use. Note cards and post cards are useful for many occasions.

The nineteen mineral specimens featured on this poster offer a glimpse of some of the most beautiful minerals in New Mexico. Photographed by well-known photographer Jeff Scovil, specimens are from the collection of the Mineral Museum on the campus of New Mexico Tech in Socorro. The map includes a descriptive poster guide with it. Produced by the New Mexico Bureau of Geology and Mineral Resources in cooperation with the Mining and Minerals Division of New Mexico's Energy, Minerals and Natural Resources Department. Posters are rolled and mailed in a cardboard tube. 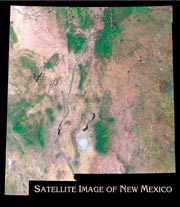 This spectacular view of New Mexico from LANDSAT satellites orbiting the Earth is printed in shades of green, blue, and red for a natural-looking image. Residents of New Mexico will recognize many of the state's unique landforms: the fertile valleys of the Rio Grande and Pecos River, Mount Taylor, Valle Grande, Elephant Butte Reservoir, and the young lava flows near Grants and Carrizozo. These and many more less-distinctive features are labeled. Computer wallpaper samples are available. 2000, 47" x 54", scale 1:500,000

This full-color state geologic map, published in July 2003, is the first geologic map of New Mexico to be published at this scale since 1965. Almost 20 years in the making, this compilation represents the collective efforts of geologists from throughout the state. Over 100 geologic units are represented. Two sheets, including detailed key and references. May be rolled, or on CD-ROM, also may be downloaded for free. New Mexico Bureau of Geology and Mineral Resources, 2003, scale 1:500,000, 2 oversized sheets, 54" x 47" and 50" x 42,"

The New Mexico Bureau of Geology and Mineral Resources, a division of New Mexico Tech, functions as the state geological survey, serving the people of New Mexico by conducting research, creating maps, and distributing information on the geologic framework and resources of the state.

We are actively seeking manuscripts for publication

Climate Change in New Mexico over the Next 50 Years: Impacts on Water Resources