We are a research and service division of: 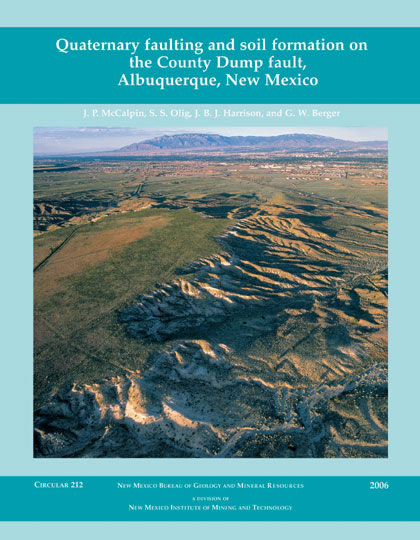 The Albuquerque–Santa Fe urban corridor is one of the fastest growing areas in the western United States. Twenty-seven Quaternary-age (1.8 million years ago to the present) faults have been identified within 40 km of downtown Albuquerque. The faults are associated with the Rio Grande rift and are responsible for 10 earthquakes of MMI (Modified Mercalli Intensity) V or greater since 1849. The largest of these was the MMI VII–VIII earthquake at Cerrillos on May 18, 1918. The County Dump fault is a 35-km-long, north-trending normal fault that is located in an area of suburban development west of the Albuquerque metropolitan area. The fault dips eastward under the city. To determine how often the County Dump fault ruptures the surface and to more fully understand the fault's paleoseismic history, the authors undertook a study that included: (1) measuring the height of the scarp formed by the fault, (2) opening multiple trenches across the fault, (3) describing stratigraphic and structural features in the trenches and sampling soil horizons exposed, and (4) collecting samples for thermoluminescence dating. The trench data indicate that perhaps as many as 14 earthquakes have ruptured along the County Dump fault in the past one million years. The pattern observed in the trenches suggests that the fault moves at intervals of about 20,000–40,000 years and results in displacements of approximately 1 m or less. The last three ground ruptures have estimated ages of 30,000, 45,000, and 80,000 years ago. If surface rupture spanned the entire 35-km length of the fault, a magnitude 6.9 earthquake would be possible.

Climate Change in New Mexico over the Next 50 Years: Impacts on Water Resources